Property prices go up as well as down, so you might not get out what you put in. The same goes for how much rent we collect. Our forecasting tools help with the guesswork but they're not a reliable way to predict the future. Please also note that invested capital is illiquid and is not protected under the Financial Services Compensation Scheme.

Ok, got it
Close

Before deciding to invest please read our full risk warning

Choosing Between Student Cities In The North For Property Investment

What cities in the north of England should you be looking at for student property investments?

The city that a student chooses to study in can shape the rest of their life, and as an investor in student property choosing where to park your money, many of the factors a student needs to consider are the same as yours. This decision can also shape the rest of your life, whether you get it right or wrong.

For a city to be worth investing in, there needs to be a good and reliable supply of potential tenants. That means the city needs to be attractive to students and therefore needs to have all the things a student is looking for. Of course, if you are looking at investing in a particular city you need to study a lot of very different things, but fundamentally, you are looking at a supply and demand issue and that largely comes down to how attractive a city is.

The appeal of investing in student accommodation

In May 1992 there were just under one million students in higher education in the UK. At the start of the 2020/21 academic year this had gone up to 2.66 million, which itself had gone up 5.4% on the previous year and was a record high for the UK’s student population. The rapid rise in student enrolments at the UK’s major universities in the late 1990s was met by a commensurate rise in the construction of purpose-built student accommodation (PBSA), this being apartment blocks and flat developments providing a new and improved standard of student living compared to the traditional perception.

Traditionally, students have lived in shared accommodation provided by the private rental sector or in university halls; PBSAs built, owned and managed by individual universities. The student population boom has, however, seen many property developers react with the provision of high-rise developments, often in city centres or on good transport routes between university campuses and nightlife epicentres. Where a steady supply of students can be guaranteed, this has led to a lucrative return for some property investors.

The appeal of student property investment is having multiple income streams from one property, be that a PBSA or house of multiple occupation (HMO), and a reliable and continual source of tenants. In addition, student properties do not require high standards of furnishing, albeit these are much higher now than the traditional image of student living from many years ago. There are some drawbacks to student investment – void periods out of term time, references and guarantors, additional management required etc – but if an investor chooses a city and location that has a strong and established student population, and a property that suits the student market, then it is easy to understand why student property investment is so popular, even taking into account the Government’s crackdown on the private rental landlord market in recent years.

What makes a student city a good place to live?

So first and foremost, if you are looking to invest in a student city in the north of the UK, you need to understand what students are looking for and what makes a particular city popular. After this you need to look at more specific property-related issues such as the economy, planning and development proposals in a location, and your own financial circumstances. But in the first instance, what factors make a student city a good place to live?

The best student cities in the north to invest in

The promotion of the Northern Powerhouse cities as progressive places to live outside of London in the new Millennium, is also reflected in their popularity as student locations. In truth, the big northern cities have long held an established reputation for attracting strong and diverse student populations, and that doesn’t look likely to change any time soon. An obvious reason for this is that they all have a range of very strong and successful higher university establishments.

How to decide on the best student city to invest in

The table below shows the respective student populations of the major student cities in the north, according to a study by the HESA. In all cases we are looking at the enrolment figures for the two largest universities in each city, as these are the most established institutions and reflect most closely the strong demand for student accommodation in these locations. The figures for Manchester are slightly misleading, because the nearby University of Salford, in Greater Manchester, also has a student population of over 30,000. 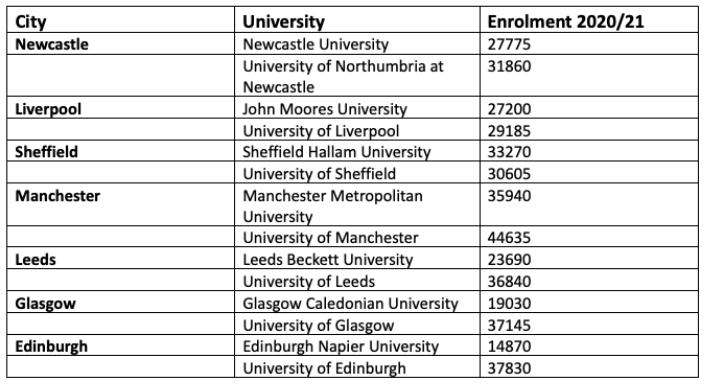 When assessing the issue of supply and demand and whether a student property investor should consider making a commitment to a specific city, you would need to assess the current stock of student accommodation available. In most of these major cities there are currently a number of ongoing developments aimed at satisfying some of the demand for affordable student accommodation.

As mentioned earlier, there is now a shift from traditional student accommodation in the private rental sector – mainly older, terraced houses which can be divided up into HMOs in order to maximise income for the landlord – to a more even balance of these with PBSAs. Not surprisingly, students now prefer to live in PBSAs because they are new, have better facilities, have a 100% student population and hence are safer, and are often centrally located close to amenities, transport and attractions.

If we take Leeds as a typical example, a report by the Construction & Housing Yorkshire division of Re’new from 2013/14 shows that there was actually a surplus of accommodation, estimated at this time to be around 4700 bed spaces. So this would have been a bad time to invest in student property. This surplus of accommodation was because the late 1990s student population boom had slowed down. In 2013/14 the total student population in Leeds was 49,530, compared to 60,530 in 2020/21. The city had no need for new PBSAs in 2013/14, and indeed the report predicted that the student population would reduce in the next few years, when it has actually increased by over 10,000 people. But the city has been slow to react and there is now an urgent need for PBSAs, while the existing HMO stock is enjoying high demand levels. It is fair to say that the same could be true in all the major northern cities in the UK, and this example demonstrates how an investor needs to be patient and wait for the right time to invest.

So what factors do you need to look at when considering a student city in the north to invest in?

Any property investment is guided by your own personal circumstances and the current state of the property market, but with student property investment, there are a number of other factors to consider. Fortunately, the big northern UK cities are all well-established as major university locations, so there is certainly a good selection to choose from when deciding where to invest.

How Has The Student Rental Market Changed In The Past 10 Years?

Published on September 22, 2022
Property
How Do You Buy And Sell A House At The Same Time?

Published on September 13, 2022
Property
What Is Conveyancing And How Do You Choose A Solicitor?

Published on September 13, 2022
Property
The Best Places to Invest in Property 2022

Published on September 13, 2022
Property
Good Contacts a Landlord Needs To Have

Published on September 5, 2022
Property
Buying A Property At Auction

The Hub is our Knowledge Center featuring useful and inspirational articles.