Learn about Risk
Close
About risk

Property prices go up as well as down, so you might not get out what you put in. The same goes for how much rent we collect. Our forecasting tools help with the guesswork but they're not a reliable way to predict the future. Please also note that invested capital is illiquid and is not protected under the Financial Services Compensation Scheme.

Ok, got it
Thank you! Your submission has been received!
Oops! Something went wrong while submitting the form.
Before deciding to invest please read our full risk warning

something went wrong and we didn't get your details. Please try again

When brothers and UOWN co-founders Shaan and Haaris Ahmed were growing up, they were fortunate to be born into a family who had made good financial decisions. In the 1970s, their grandfather had taken advantage of an opportunity, and today, with their Leeds-based property crowdfunding platform, the brothers are enabling a generation of young people to do the same.

Nazir Ahmed arrived in the UK from Malawi at a time when property was affordable and available. He quickly set about earning a living which eventually allowed him to build a property portfolio, which generations of his family are now able to benefit from.

But unfortunately, you can’t control when you are born, and in many cases, young people old enough to be making individual choices and seeking independence today, find the property market to be strewn with obstacles and limited opportunities.

The crux of this comes down to a lack of supply that has forced house prices up over the last few years. To keep up with demand, the UK needs to build 300,000 new homes every year, but this hasn’t been achieved for exactly 40 years running, and not surprisingly, over this time UK house prices have risen by an average of 7% every year.

The challenges of today’s property market for young people.

What faces young people now is a challenging situation, not unlike the traditional board game of Monopoly. Namely, all the properties have been bought up by their parents and older work colleagues, while they are stuck paying rent on these properties and not being able to build up any true assets to get ahead in the game.

Fresh from graduating from LSE and Oxford University respectively, Shaan and Haaris set about trying to change this via the power of the crowd. Most importantly they had specialist knowledge of economics, tech start-ups and property, and this gave them the fundamental tools to start UOWN and develop the concept of property crowdfunding.

UOWN invited to be keynote speakers at a Malaysian conference

The company’s success has been rapid, from a tech start-up background two years ago, the organisation has already helped thousands of people build a property portfolio for themselves, and most importantly build a fund of money that gives them a competitive advantage and can eventually be turned into bricks and mortar of their own. This success and technical innovation has caught the eye of the ASEAN angel alliance team, and resulted in the two brothers recently being invited to be keynote speakers at the ASEAN Angel Alliance Conference in Kuala Lumper.

Here the duo were met by significant dignitaries from the Malaysian Government, primarily because of their success in the UK property market, but also because interest in property crowdfunding has been raised by the Government’s recent relaxing of regulations.

This has already produced the Fund My Home model in Malaysia, which the Government is backing, but entrepreneurs and investors are naturally looking at more diverse investment opportunities, and with property crowdfunding only really taking off in the UK, USA and China so far, Malaysia sits as one of many untapped markets where more than a trickle of interest has been sparked.

Back in the UK, young people are being dubbed as ‘Generation Rent’, and not surprisingly a nationwide legion of private landlords are reaping the rewards of that. Renters in the UK are currently spending almost 30% of their income on rent, and as much as 50% in London, and yet getting nowhere on the property ladder; effectively surviving in the game of Monopoly in the hope of occasionally passing ‘Go’.

The property crowdfunding model developed by UOWN at least offers a glimmer of hope to young people and allows them to try to accumulate some moderate wealth over a period of time.

How can UOWN help young people get on the property ladder?

Consider two classic scenarios facing young people today; a young person in a decent job but living at home with their parents and trying to save for a deposit on a house, and a second young person left an inheritance who wants to use it smartly rather than earn less than 1% interest in a bank account.

In the first scenario, the person could invest in UOWNcrowdfunding opportunities and earn a regular rental income, while their investment tracks the price of the property market. They could earn around a 10% return annually this way, and immediately they could make up some of the shortfall in the differential between their salary increasing and house prices increasing. In short, they might no longer being left behind.

In the second scenario, they could use their money smarter by investing with UOWN and can spread it across multiple properties to build up a nest egg for a deposit or for later life, or to leave for their children. This is all done with no day-to-day management or hassle of any kind.

These are very common scenarios the world over, not just in the UK, and it shows how the UOWN model is adaptable to different people and to different countries.

Furthermore, the user satisfaction measures provided to UOWN via review engine TrustPilot show very high results and point towards a successful tech platform that has taken a long time to set up and get right, but crucially aims to flip the whole property investment cycle on its head and leave you earning money from property in a fraction of the time it normally takes.

You could wait three months for a property deal to complete, but with UOWN the process of applying, completing the information, waiting for compliance checks and earning rent from your investment, takes approximately two minutes. And even if you want to sell your shares, the average wait time is three weeks, which is much quicker than three months.

The benefits of investing with UOWN

With UOWN you can invest with as little as £1, but the real benefit of this property crowdfunding model is that you can leave the expertise to us. We know how to manage properties, so you don’t have to, and ultimately, you can exit on your own terms, provided there is a willing buyer at your desired price.

We are also building a new platform through which we will build our own properties and offer opportunities to make money through property development, which from Q1 2019 will aim to give crowd investors a return of 15% in less than a year. That’s our way of tackling the under-supply of housing in the UK, but crucially, it is a model that is transferrable to other countries and other markets.

This brings us back to the increasing interest in territories such as Malaysia. The Government has opened up the regulatory environment for the Fund My Home scheme, and this is also triggering the development of other schemes.

The three main stakeholders in this scheme are the buyer, the developers, and the institutions. The way it works is that the buyer has to pay just 20% of the value of the property and can live there rent-free, or without any further payments, for five years.

Institutions contribute the remaining 80% of the funds required and earn a guaranteed 5% annually. Finally, developers must put 20% of the purchase price into a trust account, which they get back before anyone else when the property is eventually sold. Institutions then get their money back, and finally, the buyers, with any additional profit split 80:20 between the institutions and buyers. 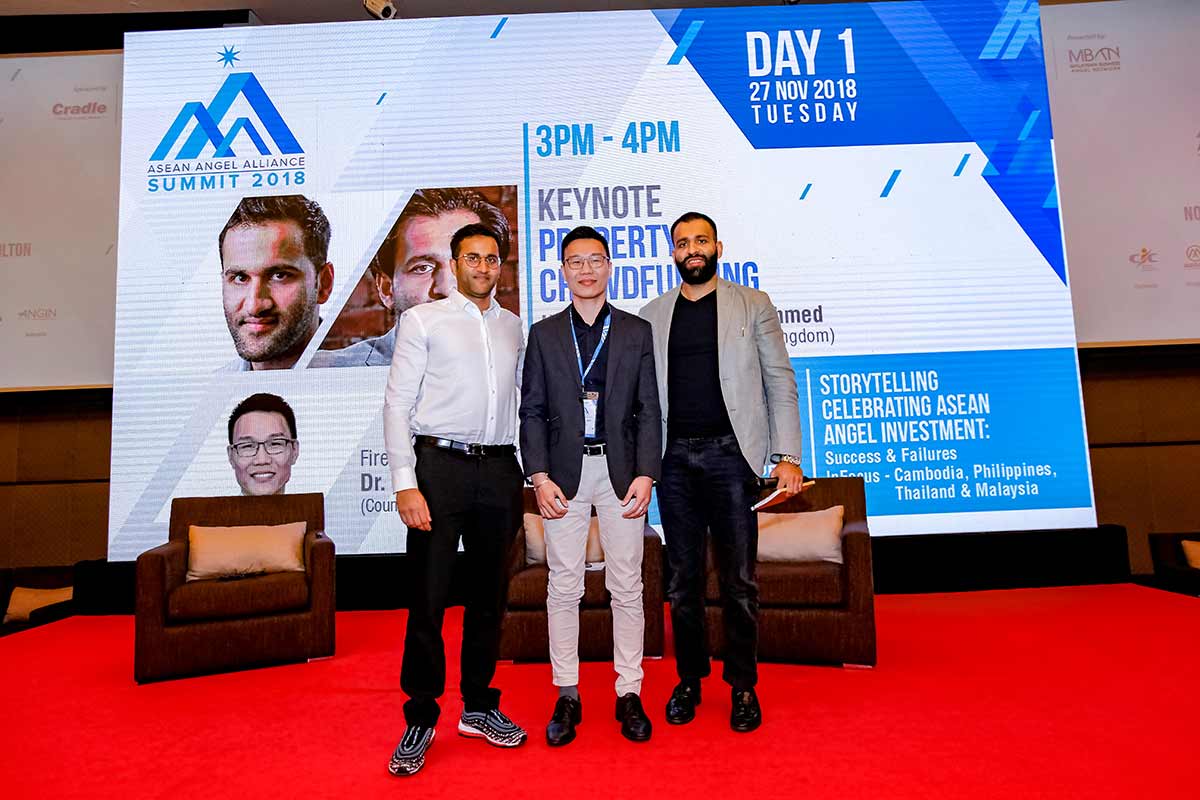 The risks of investing with UOWN

1. Property prices could fall meaning that the value of your shares can decline.

2. There may be periods when the property is not rented out and you will not receive any rent.

3. There must be a buyer for your shares when you want to sell.

4. Our forecasts and past performance help with the guesswork but we are only human and can’t predict the future.

5. No coverage under the Financial Services Compensation Scheme (FSCS)

For more information on what each of these risks means and what we do to minimise the risks please see our full risk statement.

The power of the crowd

While this is an additional opportunity for buyers to get onto the property ladder in Malaysia, there are clear pros and cons for all the parties involved, mainly based on how the property market behaves in the interim period and the attitude to risk of each party. Ultimately, however, the scheme mainly favours the developer and its lack of flexibility highlights the benefits of other crowdfunding schemes, such as the model developed by UOWN.

Alternative finance is a growing market on a global basis, and technology has helped enormously by giving more control to the user. There has been a seven-fold increase in alternative finance in Europe in the last three years, a ten-fold increase in the Americas and an amazing fifty-fold increase across Asia. That is why UOWN believes the power of the crowd is a force that can carry individuals a long way, and that Malaysian people will be the next to fully embrace the property crowdfunding concept.

UOWN can provide an exciting opportunity for people who want to be at the forefront of a new industry, and who want to be part of the solution. So, join the crowd today and see how far it can take you.

The initial strip out of Harold place has begun. We are updating investors and have a number of images and videos to show the progress.

Property
How To Flip A House In The UK

Buying and selling property is nothing new, but as a means of specifically making money as opposed to facilitating a place to live, flipping a house is an increasingly popular tactic. If done right it can certainly make you a lot of money very quickly, but like anything in the property business, there is an awful lot to consider.

Property
How To Find Tenants for Rental Properties

It might sound obvious, but there is very little point in owning a rental property if you haven’t got any tenants for it. And finding tenants might not be as easy as you think. So how do you find tenants? And how do you find the right tenants?

The Hub is our Knowledge Center featuring useful and inspirational articles.

UOWN is a trading name of U Own Exchange Limited, an appointed representative of Resolution Compliance Limited, which is authorised and regulated by the Financial Conduct Authority (FRN: 574048). UOWN, 3rd Floor, Northgate, 118 North Street, Leeds, LS2 7PN

House prices can fall as well as rise and you may not get back all of the money you invest. Any shares purchased can only be sold on the UOWN platform so you will have to wait until there is a buyer for your shares. Rates of return quoted on our website are estimates only and are not guaranteed. Investments are not protected under the Financial Services Compensation Scheme.

For more details please see our in depth risk statement.